Approximately three quarters, maybe a little less, maybe a little more (no one will ever know since I’m Fitbit-less) into my Looking Glass Rock hike, I decided I was going to start this post openly scoffing at whoever wrote to set 4-5 hours aside for this 6.5 round trip hike. While the hike ended up taking me only three hours, I ended said hike thinking that 4-5 hours is exactly what one should commit to if attempting this bad boy, mostly on account of all of the great viewing points that occur after that three-quarterish point for you to stop, linger, and relax at. A solid 4-5 hours allows you to really take it all in and not rush yourself. The top is pretty sweet too, albeit scary, a large exposed cliff face that gradually descends till it simply drops away. While the hike to the top of Looking Glass Rock switchbacks up the side and then around the back of said rock, it’s allegedly popular with rock climbers who go straight up the front. That’s a hard no from me. 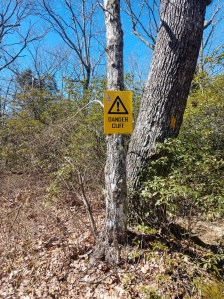 I really liked this hike, and I’ll probably be doing it again, if only as an excuse to go and explore the town of Brevard, which houses a number of breweries I want to check out, including Oskar Blue’s east coast outpost. It was a workout (I was in bed by 8:30 Saturday night due to body exhaustion), but the trail is well worn and not too rocky, which my aging joints really appreciated. Both the views up and at the top were absolutely spectacular. I’ll ideally return either on a week night, or very early on a weekend morning, so that I don’t have to contend with the crowds. Now, I’m not going to be one of those people bitching about crowds ruining my hiking experience. I think the fact that more people are getting out there and enjoying nature is great, as long as they’re doing so respectfully. What I will bitch about is how this particular hike, on this particular day, forced me to spend a Saturday afternoon among the influencers in the wild. 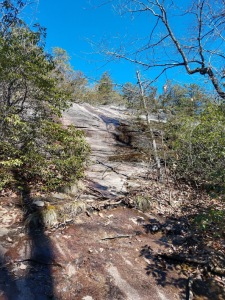 To be perfectly fair, the first awful human I encountered wasn’t an influencer, but had, as the kids say, a real influencer “energy.” I became intimately acquainted with his backside about a quarter mile from the summit when I came up behind him, he briefly turned around to acknowledge me, and then forced me to end my hike at his glacial pace as he didn’t deem it necessary to stop and let me go around. This gentleman decided to spend the fifteen minutes I was behind him on the peak of a gorgeous mountain in the middle of the Pisgah National Forest carrying on a loud conversation via air pods. He works for Amazon. He enjoys throwing around buzzwords like “tribe,” synergy,” “disruptor,” and “alignment” with reckless abandon. Naturally, everything he wore was Patagonia, and he’s “pretty stoked” that Corona Virus may be good for “his quarter.”  When we got to the top, he ended his call, took a series of selfies, and then started facetiming someone. 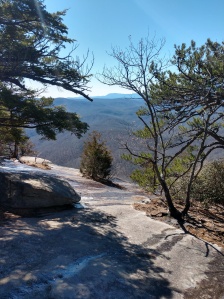 The top of the mountain was jammed, and I’m also not going to complain about that. 75% of the people up there seemed lovely; the group grilling hot dogs over a tiny grill and drinking some White Claws were particularly aspirational. I’d brought a book and was going to read a few chapters while I rested, but you know what makes it hard to read? A young lady playing the ukulele and doing a bad Janis Joplin impression while her boyfriend films her. Also? The two shirtless dudes just casually doing pushups, one of whom kept loudly repeating how stoned he was whilst hitting his vape so that everyone could acknowledge how cool he was for doing drugs. Thankfully, the shirtless men left pretty soon after I arrived, but I was destined to encounter them again back in the parking lot.  One was filming the other do pullups from a tree branch.

I didn’t even pull my book out. Between the aspiring songstress murdering Bobby McGee and my hiking up companion’s Facetime, I simply fled the scene, only to get caught behind some more influencers about halfway down. These two girls spent the majority of my time behind them talking into their phone at some alleged audience. They recorded a conversation about their hypothetical last meals. I wasn’t lucky enough to hear the entire meals, but know one included quinoa, chia seed pudding, and whatever a “Bulgarian Salad” is. If I ever get to the point where my last hypothetical meal includes chia seed pudding, I’ll know my life has been a failure. Also a failure? Darwinism, apparently.

View all posts by brothwellp2