I’m titling this post “My First Linville Gorge Hike” because I can assure you it won’t be my last.

I’ve been in Asheville four weekends at this point, which seems crazy. I’ve been kicking myself in the ass for not getting out hiking sooner. It’s just that the first weekend was move-in, the weekend after that I spent doing exciting things like shopping for end tables and finding a good shoe rack, and last weekend I planned on hiking Sunday, but then I guess I’m turning southern fast because it was 50 and cloudy which I deemed “too cold,” which brings us to the past weekend when I finally got to it.

A huge factor in me saying yes to a job in Asheville was the close proximity to so much hiking. I love hiking. It’s one of my top hobbies, up there with  travel, eating, beer, and watching YouTube videos in bed instead of tackling the pile of books on my nightstand. The problem was that to get to decent hiking from where I was based near Scranton, I had to drive at least 2 hours, and 4-5 hours for the big guns. The other problem was that somewhere along the way I became a real hiking snob. Listen, I’m not proud of this, but if the hike you’re suggesting doesn’t have an above the treeline jaunt, I consider it a walk in the woods.

Hiking back home meant either a weekend trip or at least a full day’s day trip. I love that down here there’s so many options within an hour’s drive. I’m looking forward to full days out in the mountains and can’t wait to go back to Linville Gorge and do this two-day loop, but I’m also excited to wake up early on a Saturday to hit the trails just as the sun’s coming up, bang out a new peak, and be back in town for lunch with an entire afternoon ahead of me.

Because I love an alpine walk, Black Balsam Knob has been number one on my NC hike wishlist, but the portions of the Blue Ridge Parkway needed to access that are currently closed, so I went back to said list, and to be completely honest, picked the Shortoff Mountain Hike in the Linville Gorge Wilderness area because I arbitrarily google imaged a few contenders and liked those pictures best.

The ride to the trailhead was just over an hour. It was easy too, mostly on 40 and some some back roads, which included a drive by Lake James and Fonta Flora Brewery, both of which I need to start researching for future excursions. The trailhead for Shortoff Mountain is located on Wolf Pit Road, which looks very much like a driveway from the main road. If you’re following your GPS and feel wary, you’re probably right for feeling that way, but you’re also going the correct way. I read a few very detailed descriptions of this hike, and my main and only complaint is that no one mentioned that it’s essentially a one lane dirt road and thus you may end up coming to an impasse with an angry elderly couple driving a Subaru who don’t understand how to pass on a one lane dirt road, and find yourself backing down a particularly perilous curve till they can slip by. You can’t say the same after reading this. I’ve warned you. 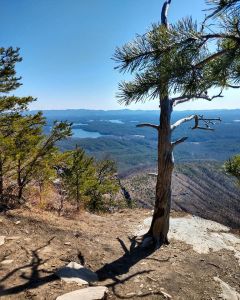 A further driving warning: there’s hardly any parking at the trailhead. I’d get there earlier than later. The nice part about Shortoff Mountain is that the trail starts aggressively. You start climbing switchbacks almost immediately, which don’t relent till you’re essentially one mile and some change in with a payoff of a view. Nice, in my humble opinion, because aside from the walk back down at the end, the rest of the trail is a mostly flat, mostly meandering walk through incredible scenery, which is probably shortchanging the initial ascent, as the scenery there is pretty incredible too, with views of the aforementioned Lake James. The switchbacks, while demanding, aren’t grueling by any means. I think my mother could do this hike, but it was also steep enough that I felt challenged and got a workout in since I was on my own and able to move quickly.

I’ve been so busy with work and my move that I didn’t take my typical research-it-to-death approach to this hike. I mean, I knew how the hike unfolded and had a map because I don’t have a death wish, but did almost zero research on the Linville Gorge Wilderness Area, so was surprised to come across quite a few backwoods campsites once I reached the top of Shortoff Mountain. I guess I assumed that because there are very few Northeastern peaks you could camp atop of, the same would be true here, but my post-hike Googling tells me that’s not the case.

I also found that the Linville Gorge is known as the Grand Canyon of the East. I feel like many states claim a gorge they deem “the Grand Canyon of the East,” but in this case it’s apt; the gorge is truly spectacular and while obviously nowhere near Grand Canyon-status, it’s deeply expansive. What I loved about it too, because its wilderness-area designation means it’s not as built up as a state or national park, is that once I got deep enough into the hike, I didn’t see a ton of other hikers. I felt like I was in the middle of nowhere.

This was a great hike to introduce me to the hiking scene in North Carolina, because it’s similar to my favorite type of hike, which is ridge walking. My favorite place to hike thus far in life is the Presidential Range in New Hampshire’s White Mountains, because after aggressive ascents, you’re above the treeline and sort of have these nice, high altitude walks with outstanding views that constitute the bulk of the hikes. It’s just here, instead of ridge walking, it’s…wait for it…rim walking (I’ll see myself out now).

Speaking of New Hampshire, I started a pretty interesting New Hampshire-themed podcast on my post-hike drive back to Asheville called Stranglehold. It’s produced by the New Hampshire Public Radio, which also produced the Bear Brook podcast I highly recommend. Stranglehold is both the story and exploration of the New Hampshire Primaries: why they’re important to the people of the Granite State, the men who act as the primary gatekeepers, and a critical look at the pageantry we assign to our politics; that’s the angle that really hooked me initially and will keep me listening. I’m mostly burnt out by political podcasts for the time being. I don’t want to hear anymore about electability, candidate purity tests, or understand the Trump voter, but a sick part of me loves becoming educated on the machinations and trivialities in our governing processes that were undoubtedly the inspiration for my favorite minor character on VEEP (see entry #5).

That took a turn! Apologies. I highly recommend Stranglehold, and I highly recommend the Shortoff Mountain Hike, and highly look forward to exploring more of the Linville Gorge Wilderness Area in the upcoming months (also, if you haven’t watched VEEP…why?).

View all posts by brothwellp2